Why rich guys want to raise the retirement age


If you’re the CEO of Goldman Sachs – if you have a job that you love, a job that makes you so much money you can literally build a Scrooge McDuck room where you can swim through a pile of gold coins wearing only a topcoat – then you should perhaps think twice before saying this:

That’s Lloyd Blankfein, CEO of Goldman Sachs, talking to CBS. And he’s not saying anything that people, particularly wealthier people with desk jobs, don’t say all the time in Washington and New York. So I don’t want to just pick on him. But the cavalier endorsement of raising the retirement age by people who really love their jobs, who make so much money they barely pay Social Security taxes, and who are, actuarially speaking, are ensured a long and healthy life, drives me nuts.


But “cutting” Social Security is unpopular and people don’t like to talk about it. So folks who want to cut the program have instead settled on an elliptical argument about life expectancy. Social Security, they say, was designed at a time when Americans didn’t live quite so long. And so raising the retirement age isn’t a “cut.” It’s a restoration of the program’s original purpose. It doesn’t hurt anything or anyone.

The first point worth making here is that the country’s economy has grown 15-fold since Social Security was passed into law. One of the things the richest society the world has ever known can buy is a decent retirement for people who don’t have jobs they love and who don’t want to work forever.

The second point worth making is that Social Security was overhauled in the ’80s. So the promises the program is carrying out today were made then. And, since the ’80s, the idea that we’ve all gained so many years of life simply isn’t true. 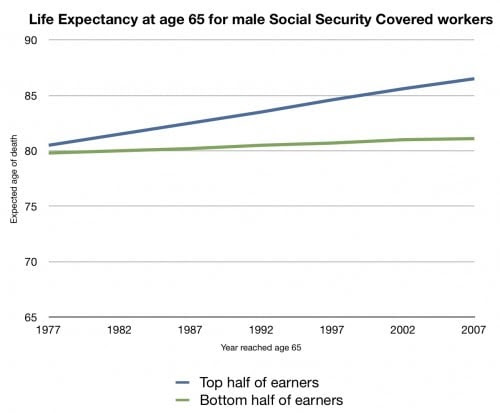 If you’re wealthy, you do have many more years to enjoy Social Security. But if you’re not, you don’t. And so making it so people who aren’t wealthy have to wait longer to use Social Security is a particularly cruel and regressive way to cut the program.

It’s also a cut that’s particularly tough on people who spend their lives in jobs they don’t enjoy.

When they do that, it means they get smaller benefits over their lifetime. We penalize for taking it early. But they do it anyway. They do it because they don’t want to spend their whole lives at that job. Unlike many folks in finance or in the U.S. Senate or writing for the nation’s op-ed pages, they don’t want to work till they drop.

That’s what’s galling about this easy argument. The people who make it, the pundits and the senators and the CEOs, they’ll never feel it. They don’t want to retire at age 65, and they don’t have short life expectancies, and they’re not mainly relying on Social Security for their retirement income. They’re bravely advocating a cut they’ll never feel.

Again, I don’t mean to pick on Blankfein here. He’s not saying anything unusual, and he’s one of the CEOs who’s pretty straightforward about the fact that his taxes are going to need to go up. But he and all these folks who like to talk about raising the Social Security retirement age as if it’s a no-brainer need to think harder about why they’ve settled on the cut to Social Security that will concentrate its pain on people who haven’t fully shared in the remarkable increase in life expectancy, who don’t make much money and who don’t love going to their jobs every day.