One study explains why it’s tough to pass liberal laws

via Wonkblog by Dylan Matthews on 3/4/13
Last year, a group of political scientists took a random sample of state legislators and asked them a slew of questions, most of which boiled down to: "What do your constituents think about policy?" Do they support gay marriage? Do they support Obamacare? Do they support action to combat global warming?
Friend-of-the-blog David Broockman and Christopher Skovron, graduate students at Berkeley and Michigan, respectively, have released a working paper based on that research and the findings are rather astonishing.
Broockman and Skovron find that all legislators consistently believe their constituents are more conservative than they actually are. This includes Republicans and Democrats, liberals and conservatives. But conservative legislators generally overestimate the conservatism of their constituents by 20 points. "This difference is so large that nearly half of conservative politicians appear to believe that they represent a district that is more conservative on these issues than is the most conservative district in the entire country," Broockman and Skovron write. This finding held up across a range of issues. Here, for example, are their findings for health care and same-sex marriage: 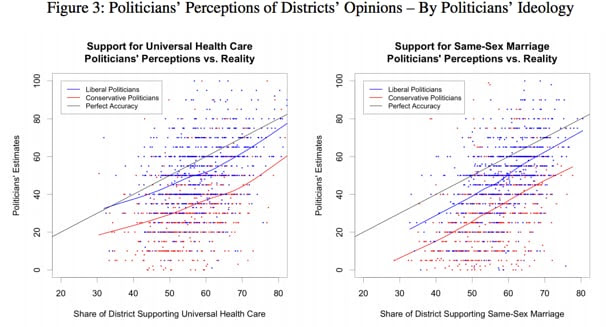 Source: Broockman and Skovron
The X axis is the district's actual views, and the Y axis their legislators' estimates of their views. The thin black line is perfect accuracy, the response you'd get from a legislator totally in tune with his constituents. Lines above it would signify the politicians think the district more liberal than it actually is; if they're below it, that means the legislators are overestimating their constituents' conservatism. Liberal legislators consistently overestimate opposition to same-sex marriage and universal health care, but only mildly. Conservative politicians are not even in the right ballpark.
Is it just that legislators don't talk to their constituents? Nope. Broockman and Skovron tried and failed to find any relationship between the amount of time legislators spend in their districts, going to community events, and so forth, and the accuracy of their reads on their districts. And this bias afflicts not just their view of their constituents, but their positions generally. Consider these charts: 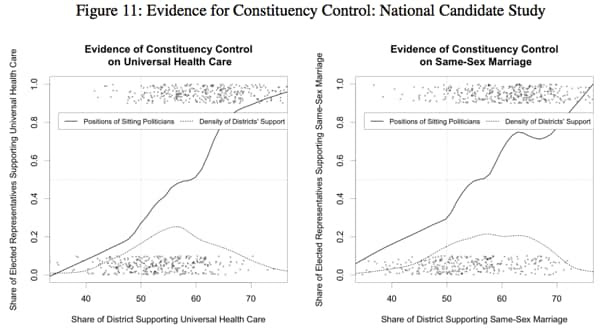 Source: Broockman and Skovron
The X axis is the percent of the district supporting universal health care or same-sex marriage; the Y axis is the share of representatives in districts with that level of constituent support who support the policy as well. The graphs show that the threshold of support a liberal policy must cross for politicians to back it is well above 50 percent, and above 60 percent for universal health care. If only 55 percent of a district supported universal health care, then more likely than not, their representative will oppose it.
The research here is young and, as a general rule, reading too much into a single working paper is foolhardy. It'd be good, for one thing, to perform district-level surveys to confirm these findings. But the data holds against a battery of robustness checks the authors threw at it. The finding on conservative legislators in particular is so large that it's hard to imagine any subsequent research would completely overturn it. But if the findings hold, they suggest both that epistemic closure on the right is real and affects state-level policymaking, and that there is a systematic bias against liberal policies at the state level.