The Economics of Evil Google

Google’s decision to shut down Google Reader has upset a number of people I know, and provoked a lot of discussion about the future of web-based services. The most interesting discussion, I think, comes from Ryan Avent, who argues that Google has been providing crucial public infrastructure — but doesn’t seem to have an interest in maintaining that infrastructure.

I’ve been trying to think this through in terms of more or less standard microeconomics, and here’s what I’ve come up with:

First, it’s a well-understood though not often mentioned point that even in a plain-vanilla market, a monopolist with high fixed costs and limited ability to price-discriminate may not be able to make a profit supplying a good even when the potential consumer gains from that good exceed the costs of production. Basically, if the monopolist tries to charge a price corresponding to the value intense users place on the good, it won’t attract enough low-intensity users to cover its fixed costs; if it charges a low price to bring in the low-intensity user, it fails to capture enough of the surplus of high-intensity users, and again can’t cover its fixed costs.

What Avent adds is network externalities, in which the value of the good to each individual user depends on how many others are using it. To some extent the monopolist can capture these externalities, since they add to the price people are willing to pay, so I’m not sure they change the logic of provision or non-provision. But they mean that if the monopolist still doesn’t find it worthwhile to provide the good, the consumer losses are substantially larger than in a conventional monopoly-pricing analysis.

So what’s the answer? As Avent says, historical examples with these characteristics — like urban transport networks — have been resolved through public provision. It seems hard at this point to envision search and related functions as public utilities, but that’s arguably where the logic will eventually lead us. 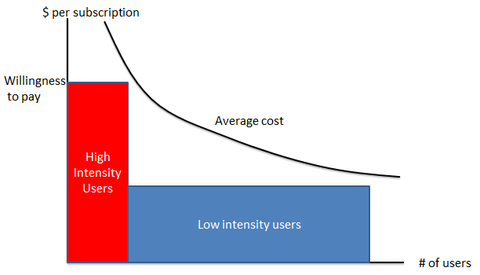