When I read opinion pieces by insiders, I often find the ostensible argument less interesting than what is taken for granted. It’s the throwaway lines, the statements that obviously are meant to refer to what “everyone knows”, that can be truly revealing about the state of conventional wisdom.


So it is with Fred Hiatt’s latest deficit-scold column. Dean Baker is exercised over Hiatt’s evident longing for a financial crisis to get action on the policies he believes are necessary to avoid an, um, financial crisis; indeed, Hiatt is following in the inglorious footsteps of Alan Greenspan, who declared almost three years ago that the failure of interest rates and inflation to soar was “regrettable”, rather than being an indication that his model of the economy was wrong.

But what I found striking was Hiatt’s offhand explanation of why his never-changing, never-right prediction keeps not happening; it’s because


the Federal Reserve is gobbling up U.S. debt to keep interest rates low

Clearly, this has become part of the CW. And once again we see how a highly dubious economic idea can become part of what Everyone knows and Nobody disagrees with, even if in this case Nobody includes a fellow by the name of Ben Bernanke, who gave a speech on this very topic just a few weeks ago.

In fact, the notion that rates are low just because the Fed is buying up debt is wrong on at least three levels.

First, as Bernanke stressed, long-term interest rates have moved very similarly across a wide range of countries, including countries where the central bank is buying up lots of bonds and countries where it isn’t. Here, for example, is a comparison of the US and France: 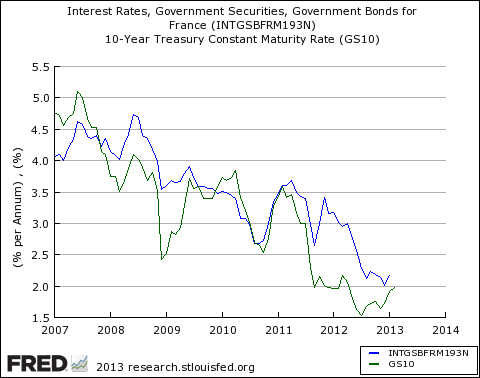 Second, if Fed purchases of bonds are crucial to keeping rates down, we should see spikes in rates when those purchases stop. In fact, a lot of people predicted that this would happen in mid-2011, when QE2 came to an end — and lost a lot of money as a result. Here’s Fed holdings of long-term assets (agency debt plus long-term Treasury debt), from here, versus long-term bond rates: 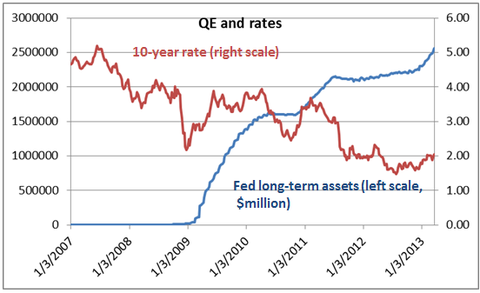 You can see a couple of pauses in the Fed’s expansion of its holdings — and no relationship at all to rates.

But finally and most importantly, since when do we believe that central banks can hold interest rates down at will, for extended periods, without consequences? Isn’t “printing money” supposed to be dangerously inflationary?

Or think of it in terms of the original Wicksellian concept of the natural rate of interest (pdf). This was supposed to be the interest rate consistent with price stability; if the central bank tried to keep rates below this level, it might be able to for a while, but the result would be an overheating economy and accelerating inflation. (Milton Friedman would later appropriate this concept by analogy to unemployment).

So if you believe that the Fed has been keeping rates artificially low for years on end — which is apparently what Everyone believes — where’s my overheated economy?

In short, the notion that rates are low only because the Fed is holding them down by “gobbling” up debt is clearly refuted by international evidence, clearly refuted by the behavior of rates over time, and logically flawed. All of that makes it perfectly suited to become part of the conventional wisdom, so thoroughly accepted that it is mentioned only in passing.